“All great men have childish curiosity about the things they do...And those who have curiosity remain creative people to the end of their life.” (Moshe Feldenkrais 1981)

There could hardly be a better characterisation of the originator of a revolutionary learning method named after him.

Moshe Feldenkrais’s amazing journey through life began when the teenager left his family in Russia and emigrated to Palestine. By the time he began to study electrical engineering at the Sorbonne in Paris (1928) he had become a successful teacher of unarmed self-defence based on martial arts principles.

After obtaining a degree in applied physics Feldenkrais worked in Frédéric Joliot-Curie’s Paris laboratory for atomic research. During this time he also established the first French Judo club under the guidance of one of Japan’s most renowned Masters. In 1936 he became the first European to obtain the black belt, 2nd degree.

When the Germans entered Paris in 1940, Feldenkrais escaped to England and spent the remaining war years in Scotland doing research into anti-submarine warfare for the British Ministry of Defence. He also be 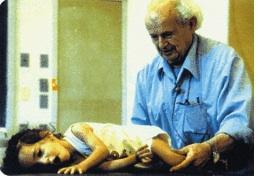 gan to be sought after as a Judo teacher, scientific lecturer, and self-help expert.

From the early fifties Moshe Feldenkrais lived and worked in Israel, continuing to develop the Method he later taught throughout the world. Even in the final years of his life the now much-acclaimed master used to thank his students for allowing him to keep refining the work while growing and maturing as a human being. Feldenkrais saw weaknesses and failings in himself just as clearly as in others. However he seldom wavered in his belief that “we are living in a historically brief transition period that heralds the emergence of a truly human man”.

The beginnings of the Method go back to some serious trouble Feldenkrais experienced with an old sports injury while he was in Scotland. Feldenkrais decided to help himself instead of putting his trust in a knee operation with an uncertain outcome. Investigating his own movement habits as well as alternatives avoiding unnecessary effort and pain, he turned himself into a veritable research laboratory. Systematic practical investigation was accompanied by intensive theoretical studies in many relevant fields, ranging from A-natomy to Z-oology. As a keen amateur in neuro-science and behavioural research, Feldenkrais opposed the then dominant school of Behaviourism and asserted that: “Mind and body are one.”

This became the foundation stone for a Method which evolved as more and more people sought out this inspiring man who refused to “teach” them in the conventional way. Instead he wished to assist them in “learning how to learn” through direct experience - just as they had once learnt in childhood (“learning instead of performing”).

He sought to rekindle their curiosity by infecting them with his own desire to understand self and world, to “take away the dust and the rust and the preconceived ideas and the brainwashing” so that they might begin to feel intensely alive again, just as they had as small children – eager to explore and investigate, and ultimately capable of taking responsibility for their lives.

“Thinking that does not lead to change of action is not thinking.”

“If you want to sum up my teaching...there is no better ferment to make people think than what I do. I’ve never found so many people thinking as in my lessons... That means thinking so that their actions, their future dealings with the world – with themselves – should be changed daily, a little bit differently.”

By the time Moshe Feldenkrais died in 1984 he had published a number of books [see Resources], trained several generations of successors, and left behind hundreds of tapes (mostly in Hebrew). The lessons recorded on these tapes have been transcribed and translated, and now serve as an inspiration for new students. So do the rather touching video recordings of the master in his late seventies very gently assisting tiny children with cerebral palsy to look for ways of overcoming the restrictions imposed on them from birth. Video-recorded lessons with adults are also enthralling. 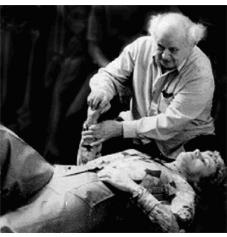 aw his Method – which he located “somewhere between intuition and future scientific gospel” - as a contribution towards an urgently required step in the evolution and transformation of human consciousness. Throughout his life this step was a guiding light: Awareness as a new stage of evolution. Moshe Feldenkrais hoped that more and more of his pupils would accept responsibility for their own lives and thereby help create “a society of superior beings...not acting on other people’s instructions or orders...”; that they would ensure the Method’s continued growth in scope and refinement; and that they themselves would ultimately be able to leave behind pre-occupation with the little self:

“We can say that the work is more important than you and I. It is the work that is important. Many people never learn that. They see only the technical part...”

Applications of the method
In-depth Articles

Applications of the method
In-depth Articles